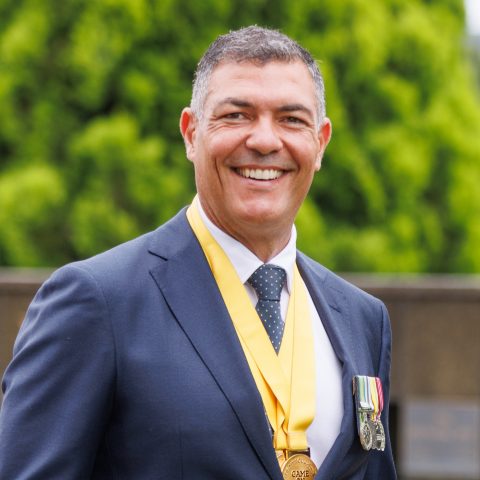 Ben is a proud father, husband and Australian. He was born in Brisbane and has Aboriginal and Italian heritage. He attended boarding school at The Southport School, Gold Coast.

At age 16 he joined the Australian Defence Force and served as an Army Officer. In 1999, he deployed on active service as part of the International Force in East Timor. Following a decade in the military, he successfully transitioned to a civilian career and held several senior executive, CEO and board roles in Australia and offshore.

In 2015, he suffered significant mental and physical challenges. Over the next three years, he overcame seemly insurmountable odds as part of his inspiring journey to represent Australia at Invictus Games Sydney 2018. He battled post-traumatic stress disorder, depression, anxiety and a broken neck and back to compete in indoor rowing and powerlifting. He had the crowd on their feet and then in tears as he won two gold medals and ran over to embrace his family.

Today, Ben lives with his family in Queanbeyan, near Canberra. He is an Ambassador for Australia Day, Lifeline, Soldier On, Kookaburra Kids and other charitable organisations. He continues to be a passionate advocate for mental health, wounded veterans and the healing power of sport.